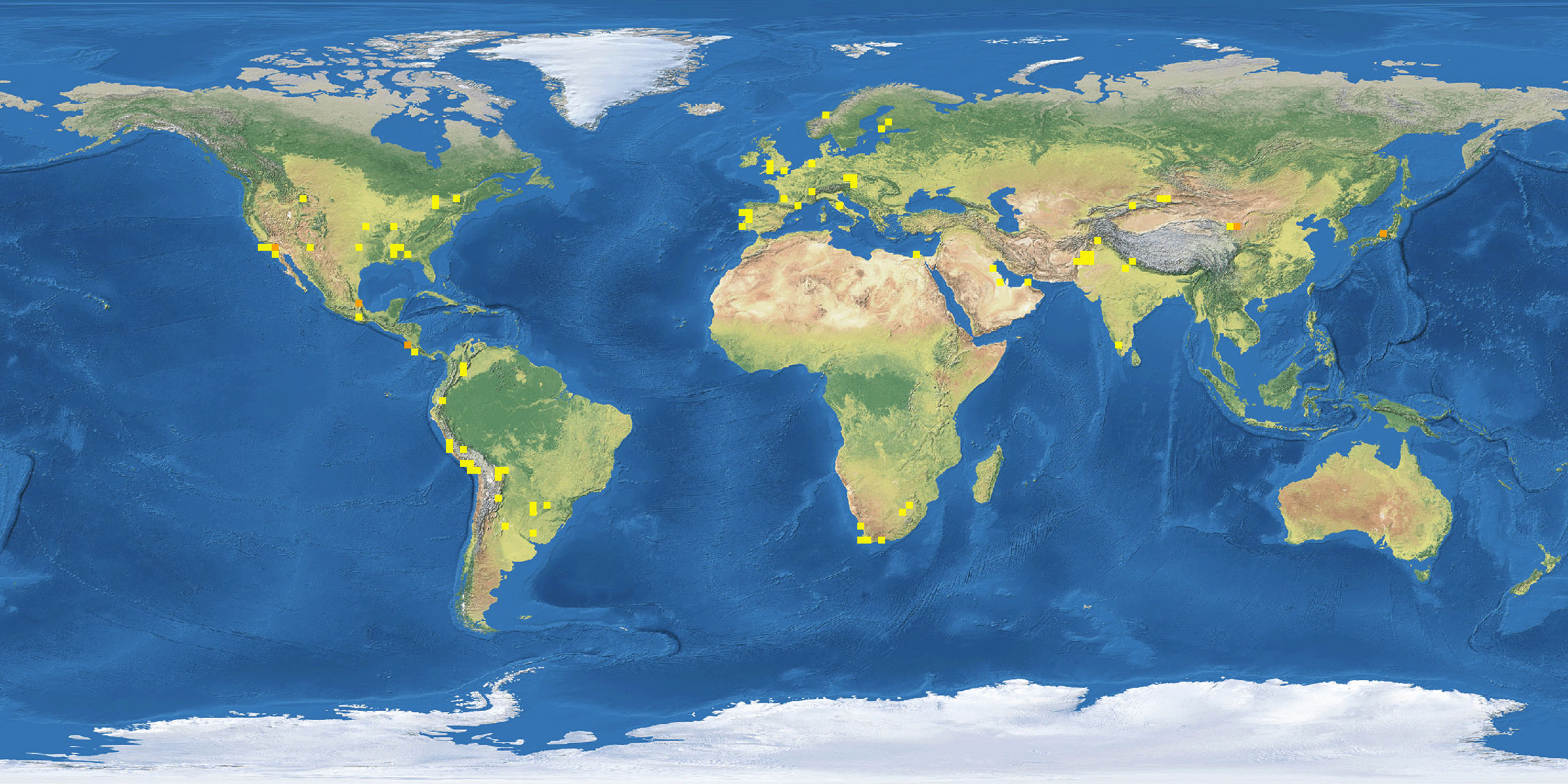 Salvia:
For other uses, see Salvia (disambiguation) and Sage.
Not to be confused with Saliva.

Salvia is the largest genus of plants in the mint family, Lamiaceae, with nearly 1000 species of shrubs, herbaceous perennials, and annuals.[3][4][5] Within the Lamiaceae, Salvia is member of the tribe Mentheae within the subfamily Nepetoideae.[3] It is one of several genera commonly referred to as sage.

The genus is distributed throughout the Old World and the Americas, with three distinct regions of diversity: Central and South America (approx. 500 species); Central Asia and Mediterranean (250 species); Eastern Asia (90 species).[3]

Salvia species include annual, biennial, or perennial herbs, along with woody subshrubs. The stems are typically angled like other members in Lamiaceae. The leaves are typically entire, but sometimes toothed or pinnately divided. The flowering stems bear small bracts, dissimilar to the basal leaves—in some species the bracts are ornamental and showy.

The flowers are produced in racemes, or panicles, and generally produce a showy display with flower colors ranging from blue to red, with white and yellow less common. The calyx is normally tubular or bell shaped, without bearded throats, and divided into two parts or lips, the upper lip entire or three-toothed, the lower two-cleft. The corollas are often claw shaped and are two-lipped. The upper lip is usually entire or three-toothed. The lower lip typically has two lobes. The stamens are reduced to two short structures with anthers two-celled, the upper cell fertile, and the lower imperfect. The flower styles are two-cleft. The fruits are smooth ovoid or oblong nutlets and in many species they have a mucilaginous coating.[6]

Many salvias have trichomes (hairs) growing on the leaves, stems, and flowers, which help to reduce water loss in some species. Sometimes the hairs are glandular and secrete volatile oils that typically give a distinct aroma to the plant. When the hairs are rubbed or brushed, some of the oil-bearing cells are ruptured, releasing the oil. This often results in the plant being unattractive to grazing animals and some insects.[4] Male digger bee probing a male-stage flower of Salvia hierosolymitana. The stamens deposit pollen on the bee's back.

The defining characteristic of the genus Salvia is the unusual pollination mechanism. It is central to any investigation into the systematics, species radiation, or pollination biology of Salvia. It consists of two stamens (instead of the typical four found in other members of the tribe Mentheae) and the two thecae on each stamen are separated by an elongate connective. It is the elongation of the connective that enables the formation of the lever mechanism.[7] Sprengel (1793) was the first to illustrate and describe the nototribic (dorsal) pollination mechanism in Salvia.[8] When a pollinator probes a male stage flower for nectar, (pushing the posterior anther theca) the lever causes the stamens to move and the pollen to be deposited on the pollinator. When the pollinator withdraws from the flower, the lever returns the stamens to their original position. In older, female stage flowers, the stigma is bent down in a general location that corresponds to where the pollen was deposited on the pollinator's body. The lever of most Salvia species is not specialized for a single pollinator, but is generic and selected to be easily released by many bird and bee pollinators of varying shapes and sizes.[9] The lever arm can be specialized to be different lengths so that the pollen is deposited on different parts of the pollinator’s body.[10][7] For example, if a bee went to one flower and pollen was deposited on the far back of her body, but then it flew to another flower where the stigma was more forward (anterior), pollination could not take place. This can result in reproductive isolation from the parental population and new speciation can occur.[7] It is believed that the lever mechanism is a key factor in the speciation, adaptive radiation, and diversity of this large genus.[7]

George Bentham was first to give a full monographic account of the genus in 1832-1836, and based his classifications on staminal morphology.[11] Bentham's work on classifying the family Labiatae (Labiatarum Genera et Species (1836)) is still the only comprehensive and global organization of the family. While he was clear about the integrity of the overall family, he was less confident about his organization of Salvia, the largest genus in Labiatae (also called Lamiaceae). Based on his own philosophy of classification, he wrote that he "ought to have formed five or six genera" out of Salvia. In the end, he felt that the advantage in placing a relatively uniform grouping in one genus was "more than counterbalanced by the necessity of changing more than two hundred names." At that time there were only 291 known Salvia species.[4]

Bentham eventually organized Salvia into twelve sections (originally fourteen), based on differences in corolla, calyx, and stamens. These were placed into four subgenera that were generally divided into Old World and New World species:

His system is still the most widely studied classification of Salvia, even though more than 500 new species have been discovered since his work. Other botanists have since offered modified versions of Bentham's classification system, while botanists in the last hundred years generally do not endorse Bentham's system.[4]

It was long assumed that Salvia's unusual pollination and stamen structure had evolved only once, and that therefore Salvia was monophyletic, meaning that all members of the genus evolved from one ancestor. However, the immense diversity in staminal structure, vegetative habit, and floral morphology of the species within Salvia has opened the debate about its infrageneric classifications.

Through DNA sequencing, Salvia was shown to not be monophyletic but to consist of three separate clades (Salvia clades I-III) each with different sister groups.[3] They also found that the staminal lever mechanism evolved at least two separate times, through convergent evolution.[3] Walker and Sytsma (2007)[12] clarified this parallel evolution in a later paper combining molecular and morphological data to prove three independent lineages of the Salvia lever mechanism, each corresponding to a clade within the genus. It is surprising to see how similar the staminal lever mechanism structures are between the three lineages, so Salvia proves to be an interesting but excellent example of convergent evolution.

Walker and Sytsma (2007) also addressed the question of whether Salvia is truly polyphyletic or just paraphyletic within the tribe Mentheae.[12] To make Salvia monophyletic would require the inclusion of 13 species from Rosmarinus, Perovskia, Dorystaechas, Meriandra, and Zhumeria genera. The information attained by Walker and Sytsma (2007) supporting the three independent origins of the staminal lever indicate that Salvia is not the case where 13 species (currently not members of the genus) are actually members of Salvia but underwent character reversals—in other words, Salvia is paraphyletic. Instead, Salvia is defined by its convergent character of distinct staminal evolution that proves its polyphyly.[12]

The description of individual species within Salvia has undergone constant revision. Many species are similar to each other, and many species have varieties that have been given different specific names. There have been as many as 2,000 named species and subspecies. Over time, the number has been reduced to less than a thousand. A modern and comprehensive study of Salvia species was done by Gabriel Alziar, in his Catalogue Synonymique des Salvia du Monde (1989) (World Catalog of Salvia Synonyms). He found that the number of distinct species and subspecies could be reduced to less than 700.[4][13]

Selected species and their uses[edit]

Many species are used as herbs, as ornamental plants (usually for flower interest), and sometimes for their ornamental and aromatic foliage. The Plant List has 986 accepted species names.[14] A selection of some well known species is below.

Salvia species are used as food plants by the larvae of some Lepidoptera (butterfly and moth) species including the bucculatricid leaf-miner Bucculatrix taeniola which feeds exclusively on the genus and the Coleophora case-bearers C. aegyptiacae, C. salviella (both feed exclusively on S. aegyptiaca), C. ornatipennella and C. virgatella (both recorded on S. pratensis).

The name Salvia "salviya" derives from the Latin salvere ("to feel well and healthy, health, heal"), the verb related to salus (health, well-being, prosperity or salvation); referring to the herb's healing properties. Pliny the Elder was the first author known to describe a plant called "Salvia" by the Romans, likely describing the type species for the genus Salvia, Salvia officinalis.

The common modern English name sage derives from Middle English sawge, which was borrowed from Old French sauge, and like the botanical name, stems from Latin salvere.[17][18] When used without modifiers, the name 'sage' generally refers to Salvia officinalis ("common sage" or "culinary sage"); however, it is used with modifiers to refer to any member of the genus. The ornamental species are commonly referred to by their genus name Salvia.

Salvia africana-caerulea is a heavy branched aromatic perennial shrub native to the coast of South Africa, found on coastal dunes and in nearby rocky hills up to 600 m elevation. It grows to 60-90 cm, with round grayish stems covered with hairs that release a strong scent when brushed. The leaves are a soft grey-green, lighter on the underside, and elliptical shaped. The inflorescences reach 30 cm long, with 2-6 flowers in each whorl, ranging from pale blue to pale violet or pink.[1]

Salvia africana-lutea (beach salvia, dune salvia, golden salvia, bruin- of sandsalie, geelblomsalie) is a shrubby evergreen perennial native to coastal sand dunes and hills on the coast of the Cape Province in South Africa. It has numerous woody stems growing to more than 1 m in height and width, with sparse grey-green leaves. The flowers start out as a bright yellow, turning into a rusty color, with the dark rusty-colored calyx persisting long after fruiting begins.[2]

Salvia × superba is a widely grown Salvia hybrid. Its origins are unknown, though it first appeared in cultivation, and its parents are believed to include Salvia × sylvestris and Salvia amplexicaulis. Salvia nemorosa has also been suggested as a direct parent or close relative, but with so many similarities between these species and hybrids, there is no conclusive evidence. It is often mistakenly called Salvia superba.[1][2]

Salvia × superba grows about 1 m (3.3 ft) tall, with flowers ranging from violet-blue to pale pink. The flowers grow in whorls that are a bit more separated than in their parents. Selected cultivars include the confusingly named 'Superba', and 'Rubin'.[2] The cultivar 'Rubin'[3] has gained the Royal Horticultural Society's Award of Garden Merit.